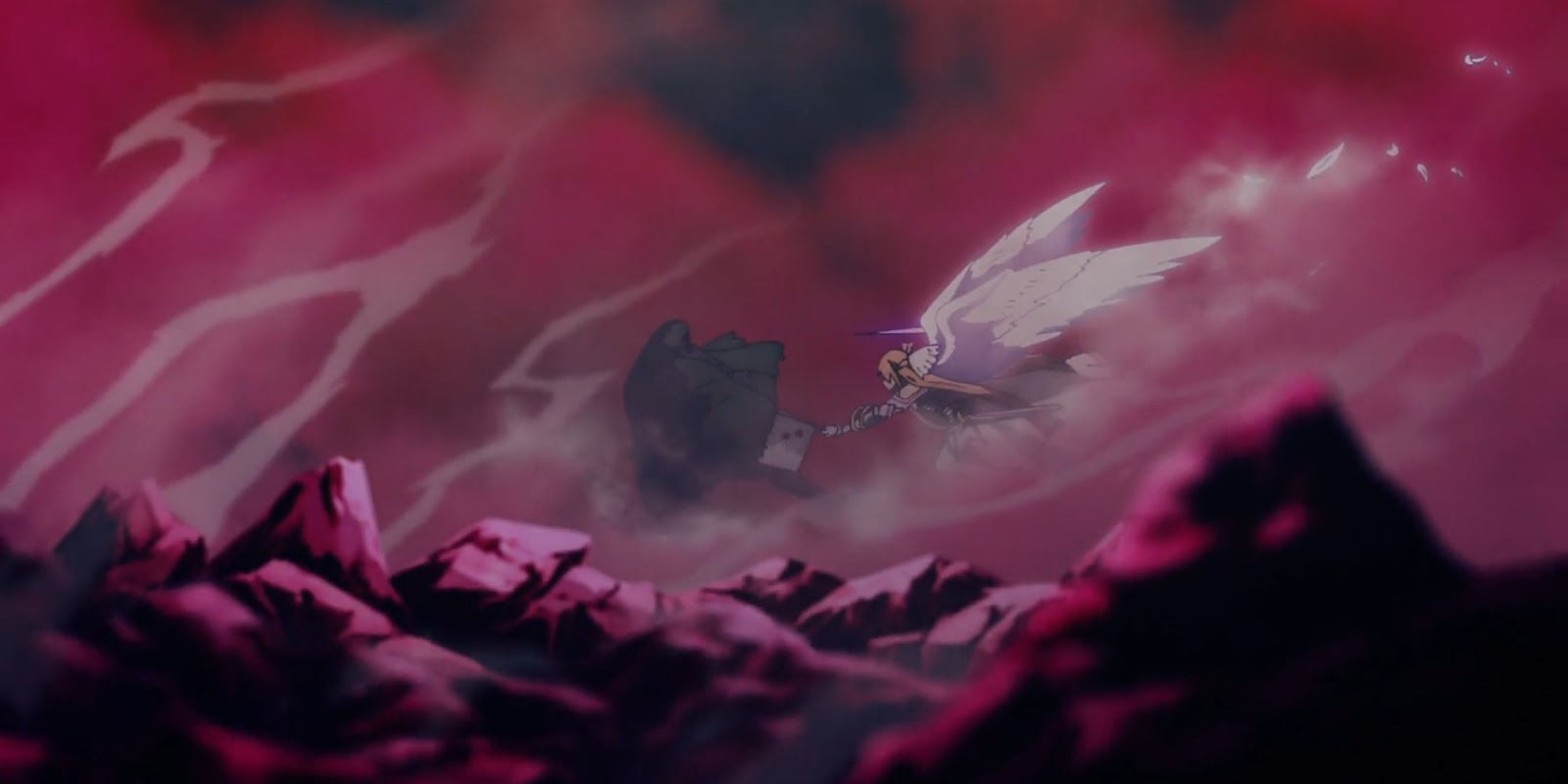 Warning: This review and synopsis will contain spoilers.
This was a long-awaited episode for LN readers. If you are on anitwitter then you already know my love/hate relationship with the LN readers. They are an excellent source of information but sometimes they give too much information oftentimes spoiling upcoming episodes. They do have a place in our community though. They are happy to answer questions after the episode of something didn't fit or needed more explanation. Now on to the episode.
This episode starts out with Kirito in a classroom. He then walks around and passes his friends unknowingly. There is an advertisement for Nerve Gear on a big screen. He turns his head down an alley and our hearts skip a beat when we see our beloved Sachi. We are blessed with a new op.
We are brought back to the battlefield. Vassago continues to taunt Kirito as he lays immobile. Then comes the moment that we've been teased for weeks. My heart about burst when I saw Yuuki. Asuna suddenly finds strength and uses Mother's Rosario. There are some arguments from ln readers about this scene. I will link Reiki's explanation below.
Vassago goes into a strange spiel about how much he loves Kirito. Same Vassago same. 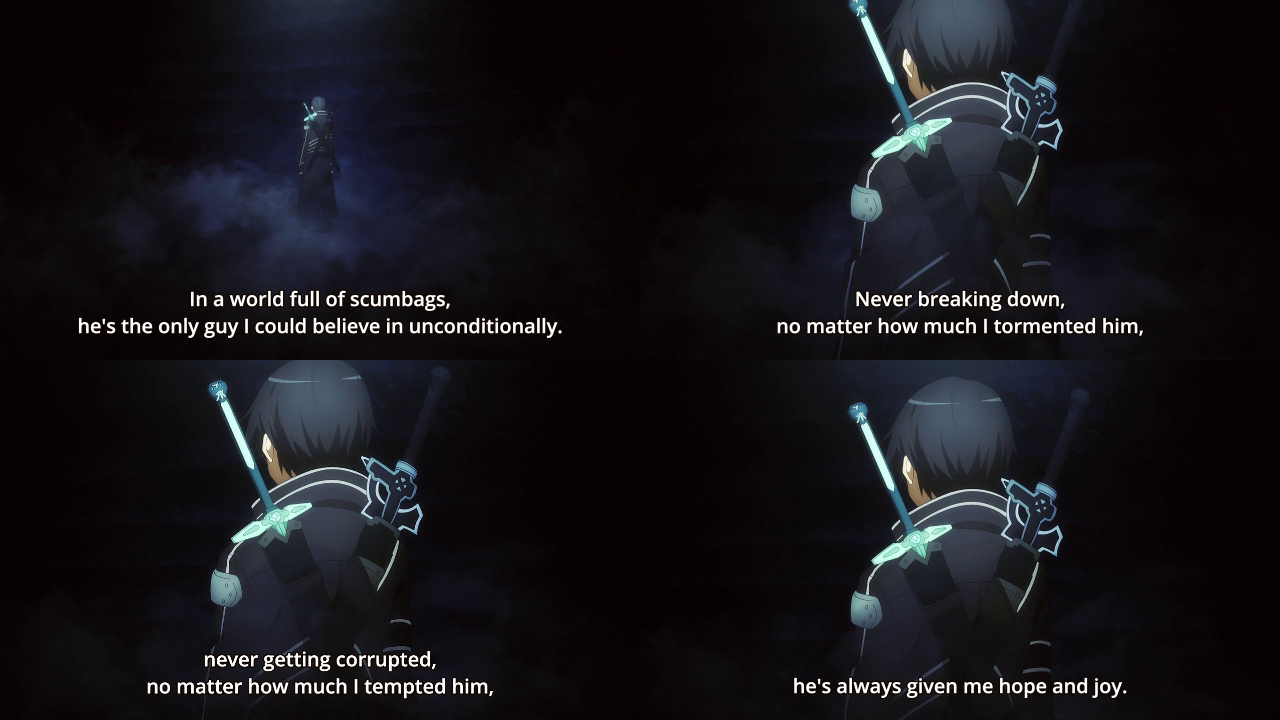 Vassago explains how he understands how this world works. All the spilled blood and lives are converted into energy. His mate chopper is being powered up by that energy. It is absorbing human life. He says that once he absorbs all that energy he is going to kill all the artificial fluctlights to wake Kirito up.
This scene is beautifully animated. We get a lot of special effects and best of all we get Yuuki. Asuna is transformed and sprouts wings. She is quite the angel. Our girl is getting her moment. This is the fight scene we have needed from her and Yuuki is the cherry on top. Her friends call out her name and cheer her on. I love seeing Asuna finally get this kind of attention this season. She is a strong character even though SAO haters would disagree. I feel like this proves it. 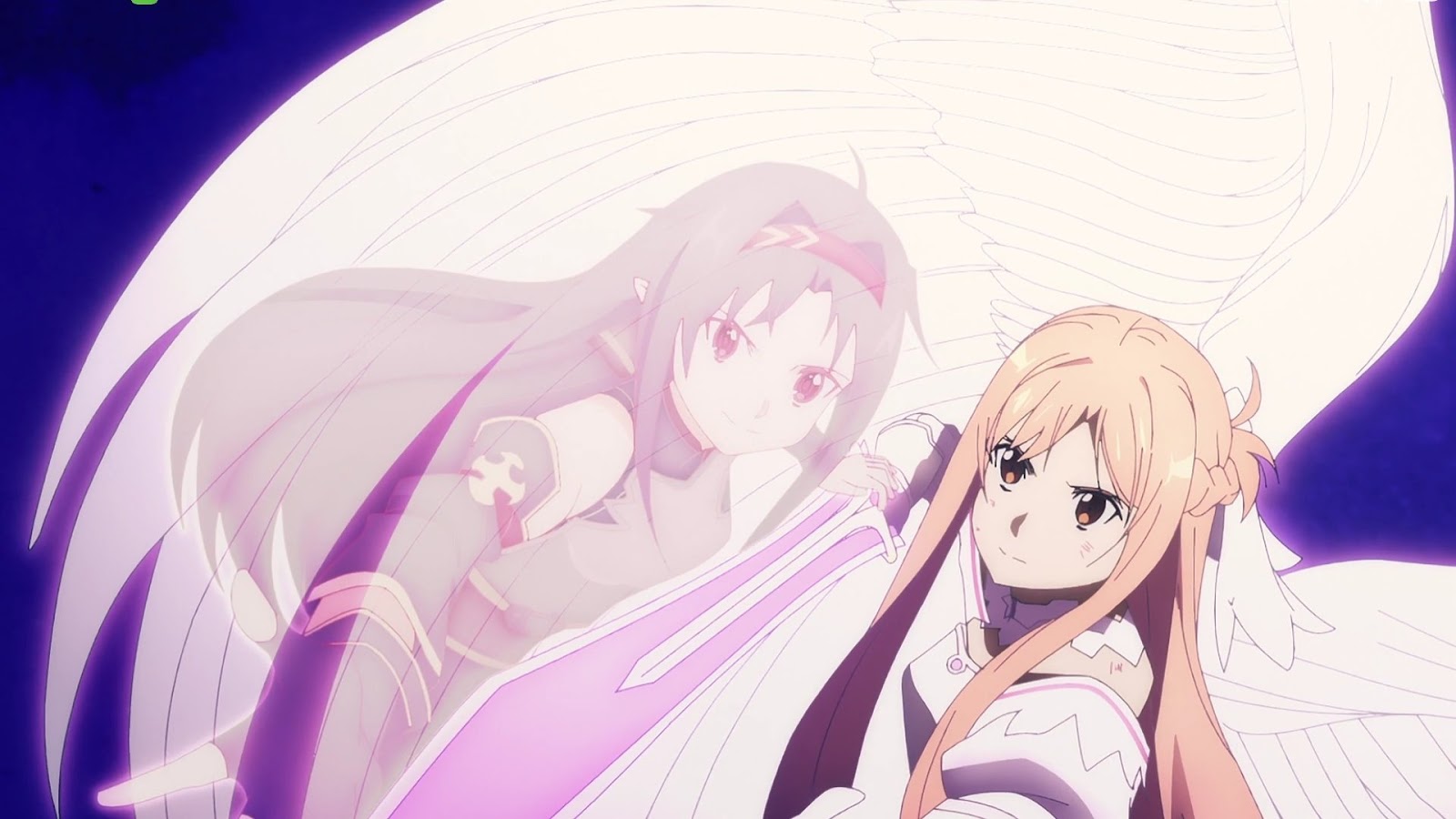 Vassago is still alive after the fight. He does have a huge hole in his chest. Mate chopper is throbbing with energy. Asuna gets knocked down by soldiers and reached out to Kirito who is still lying lifeless on the ground.
We are taken back to the nightmare where Kirito watches Sachi and his friends die again.
This episode was one of the only ones this season where I just cried really hard.
You can feel Kirito's suffering and death is being displayed all around him on large screens. All the people he killed. 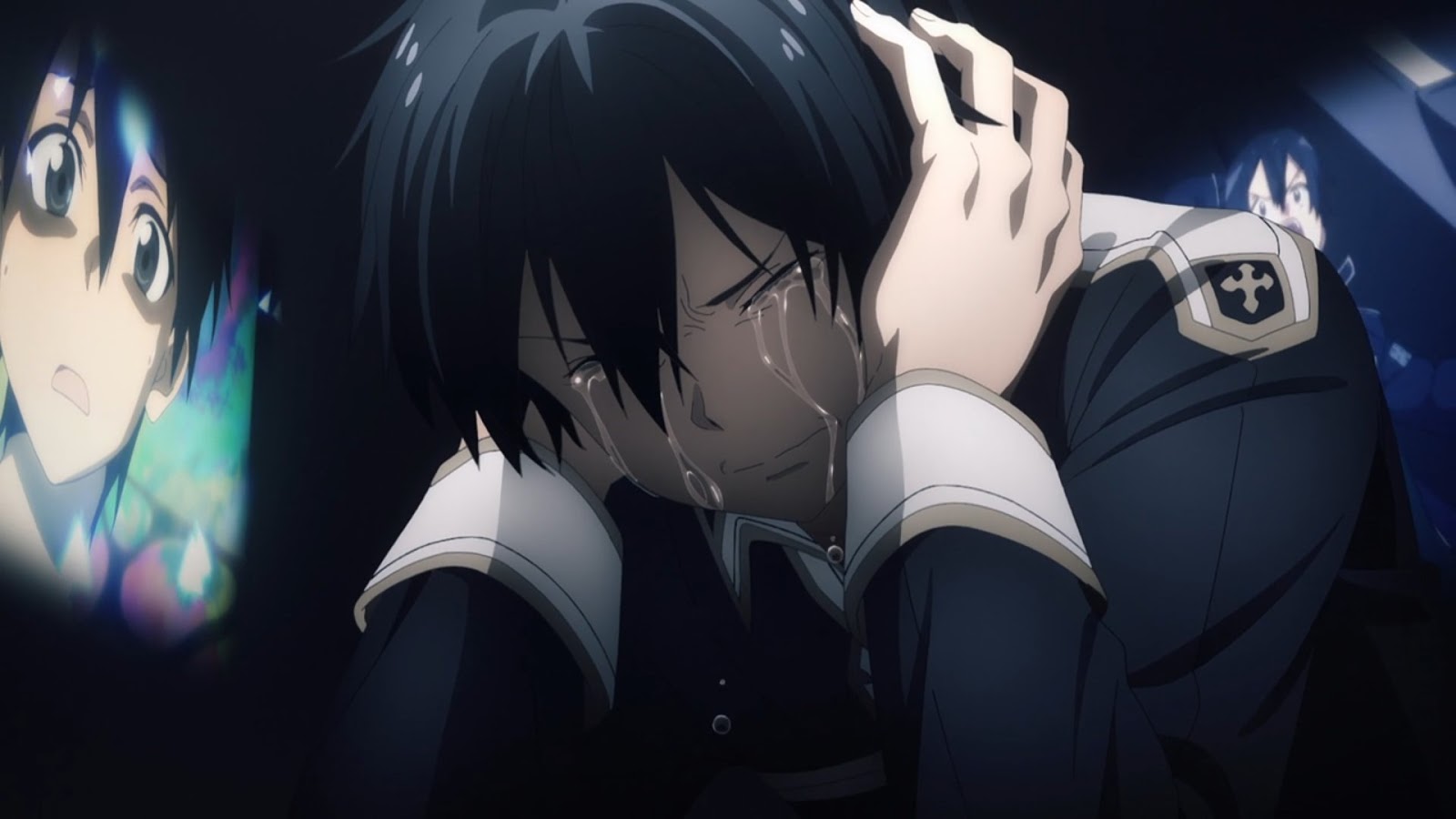 Now, this is a visual representation of depression. People who have depression will often have these scenes playing in their heads on repeat. Our failures on full display. Obsessing over where we went wrong. Our minds often distorting facts to make them worse. This is a very powerful scene and again shows mental health awareness in this anime. I am very pleased to be able to talk about this and use it to promote awareness. 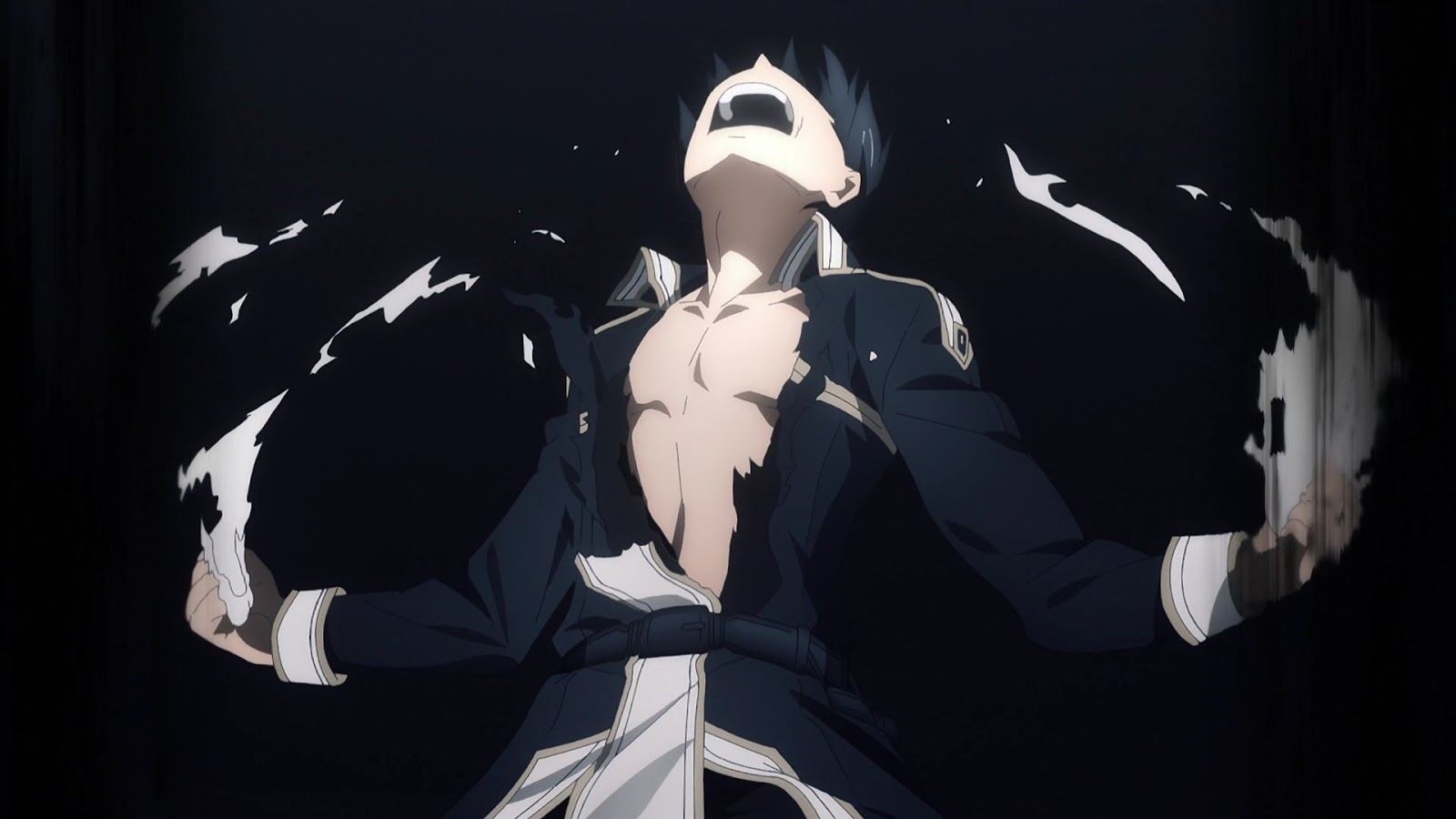 We get flashbacks of Eugeo. This sends Kirito further over the edge. He says that he is the one who should have died. Kirito is so beside himself with self-hate and grief. He can't take it anymore. The suffering is too much. He starts ripping his clothes off and ripping out his own heart. This scene is extremely gory but again a visual representation of how much he is suffering and wants it to stop.
Asuna, Sinon, Sugu show up and he tells them he is sorry. He doesn't deserve their forgiveness. He can't fight anymore. He rips out his heart. 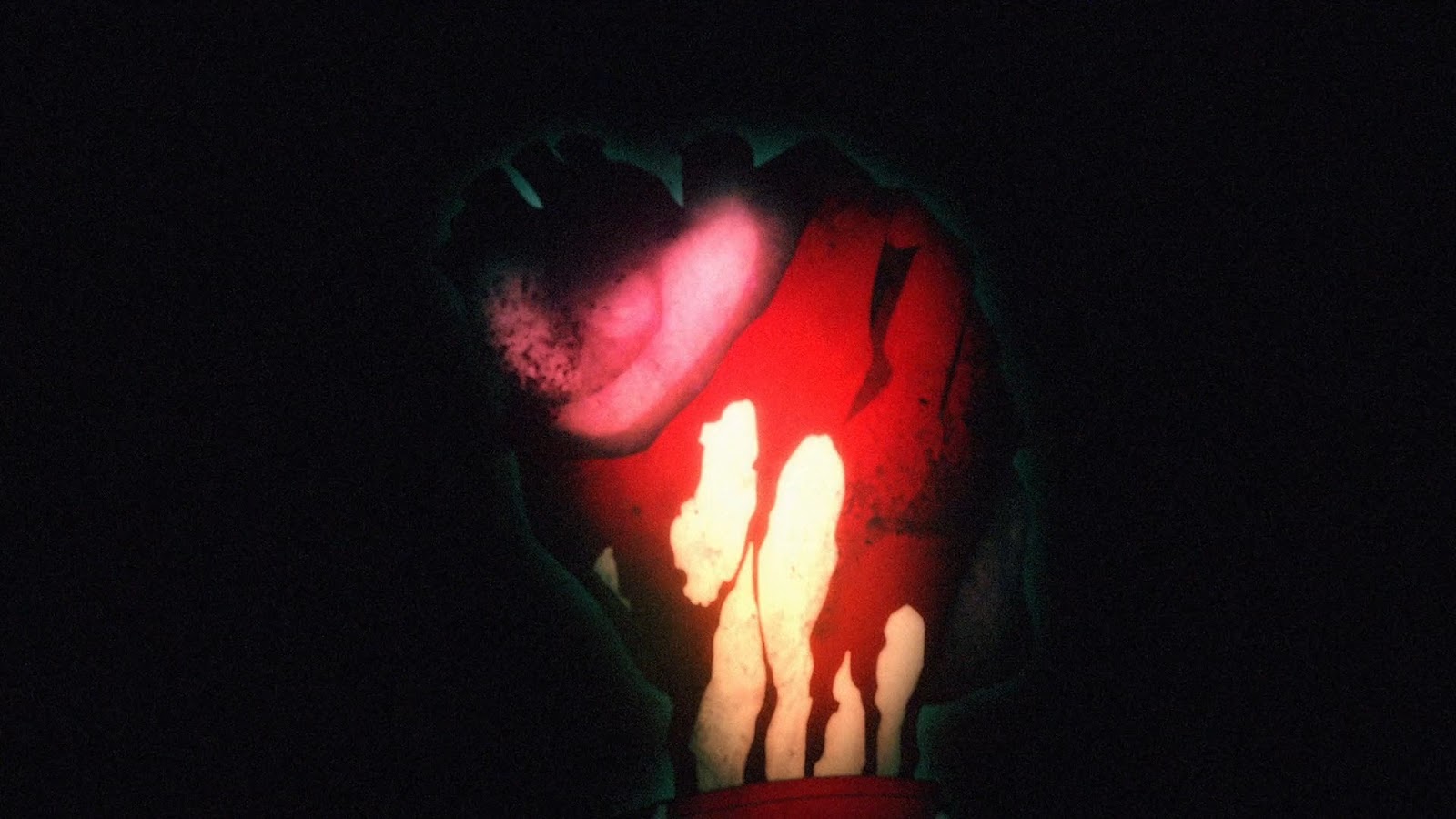 Higa says they need one more person that has strong memories of him to bring him back. All of a sudden he sees activity. We get Eugeo. Eugeo explains memories. Also, can I pause here and say what a cute couple my best girl Sinon and Eugeo would have been? I wish they could have met. Anyways. Of course, it would be Eugeo to bring Kirito back. Kirito asks Egeo if it is really okay for him to start walking again. Eugeo says of course. We get such a heartwarming moment with all of them taking his hand. 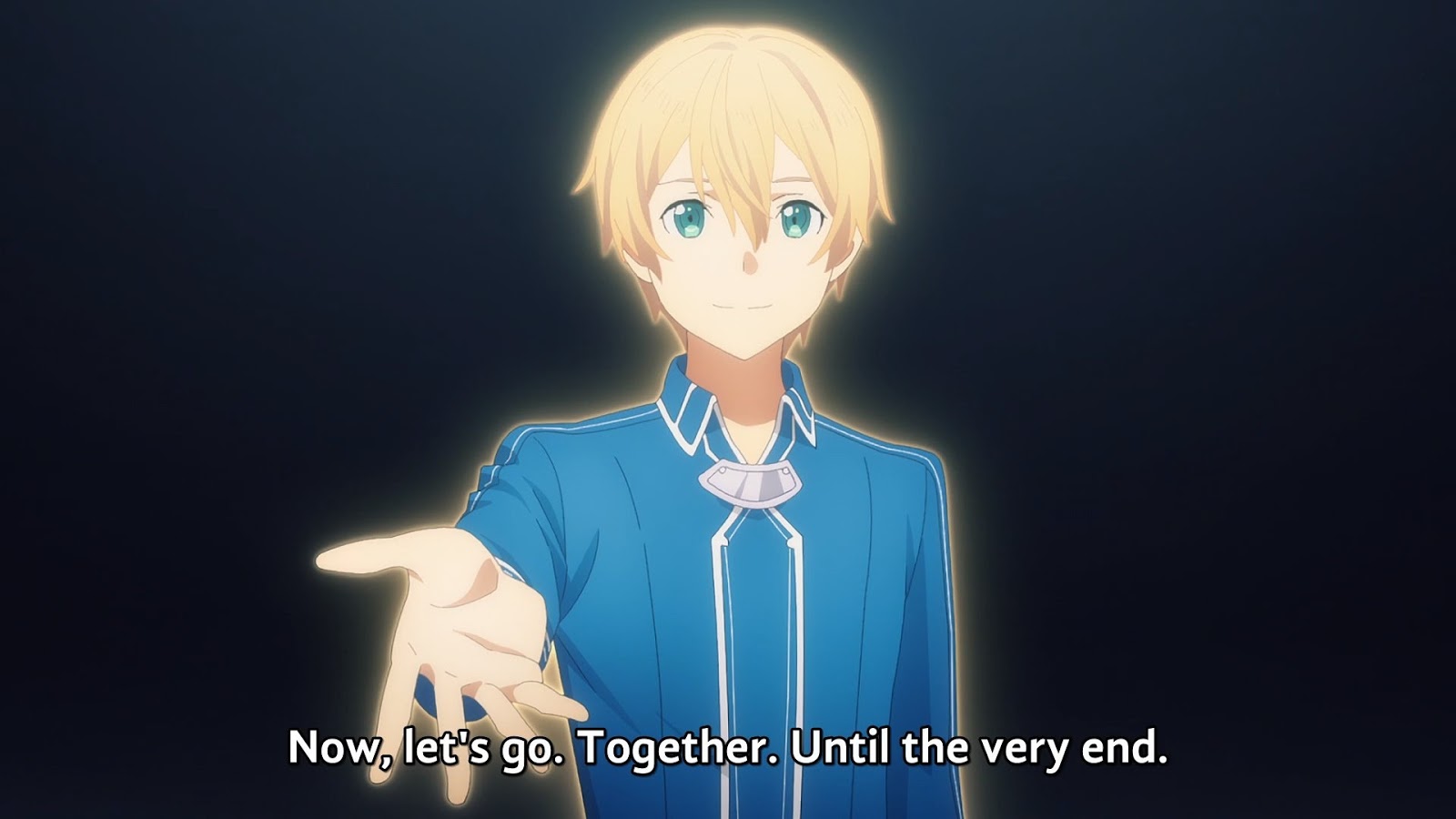 We are thrown back to the battlefield. Energy is swirling all around. I really like how they animated the energy. They did an excellent job with the special effects in this episode. Asuna is on the ground reaching out for Kirito calling out to him. A soldier steps on her arm and is poised to kill her. She closes her eyes.
There is a pause and Vassago turns around with crazy eyes and we see Kirito holding himself up with his sword. My heart skips a beat when he says "enhance armament". Let's Fucking Go!!!!!!! Vassago and the red soldiers are wrapped in ice. Asuna stumbles towards Kirito. Vassago breaks out of the ice and tries to kill Asuna. Kirito stops him and regrows his arm??? Asuna says "Welcome back Kirito" with tears in her eyes and Kirito says "I'm back, Asuna". He turns back to look at her. Our hearts melt and that's the end of the episode. This was easily one of the best episodes so far this season. SAO just keeps getting better. This episode was much better paced than the previous episodes. I know the LN readers said the episode in the LN was better but let's be honest here. They can't adapt everything that is in the LN to TV. It would take too much time and the episodes would need to be a lot longer. I would not complain. I hate these 23-minute episodes. I want more.
Follow Reki on Twitter. On Sundays he has been giving commentary on the episodes. He provides valuable insight and things we may have missed.Reki Kawahara's Twitter
Also follow these SAO AniTwitter G.O.A.T's :
DarkSwordsman Dark is the friend who got me into SAO. He posts some great insights into anime and also computer tech on his feed. He has a Twitch and a YouTube.
RoseCorazon Cora is the leader of #RoseKnights. He also has a YouTube and Twitch. Links are in his bio.
Ego Ego is an LN reader. He is great about educating people about SAO and dispelling misconceptions. I like to think of him as the defender of our community.
RoseSpeezenator is in my anime group chat and on the weekly Anime Podcast.
Orion is a super sweet friend who posts great SAO content.
Someotaku posts so and other anime. LN's, mobile games, etc.
Yuuki - Shino-Non Fellow Sinon stan.
No Context SAO This account has been known to post controversial things so follow at your discretion.
I have a lot of AniTwitter friends. I will do a separate post for those friends who don't primarily post SAO content.