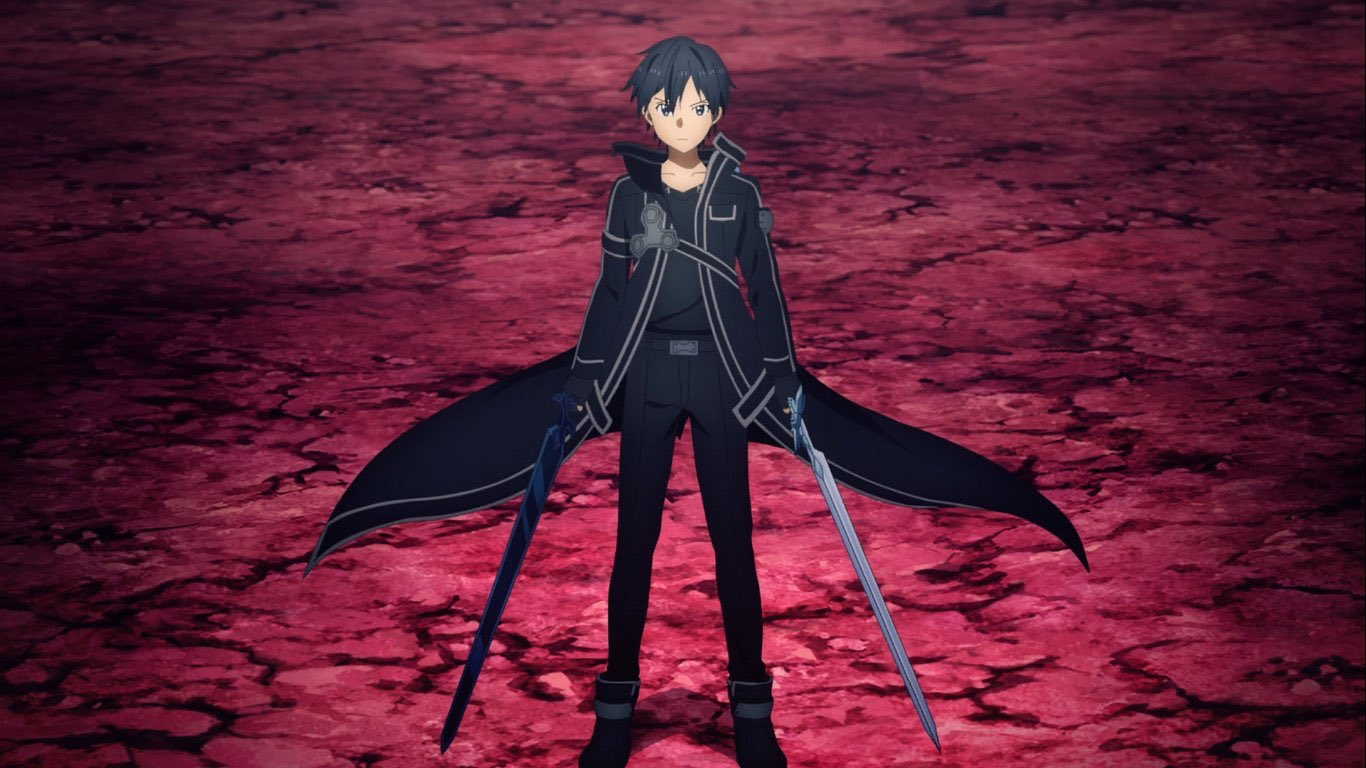 This post will contain heavy spoilers.
The episode starts off where we ended. Kirito is standing on the battlefield facing Vassago. Vassago says it's the continuation of showtime. New op. Anima by Reona is absolutely beautiful and just fits this season. Vassago and Kirito fight. It is so good to hear Kirito's voice again this season.
Vassago tries to get Kirito to throw down the broken blue rose sword so he can use both hands. Kirito refuses. 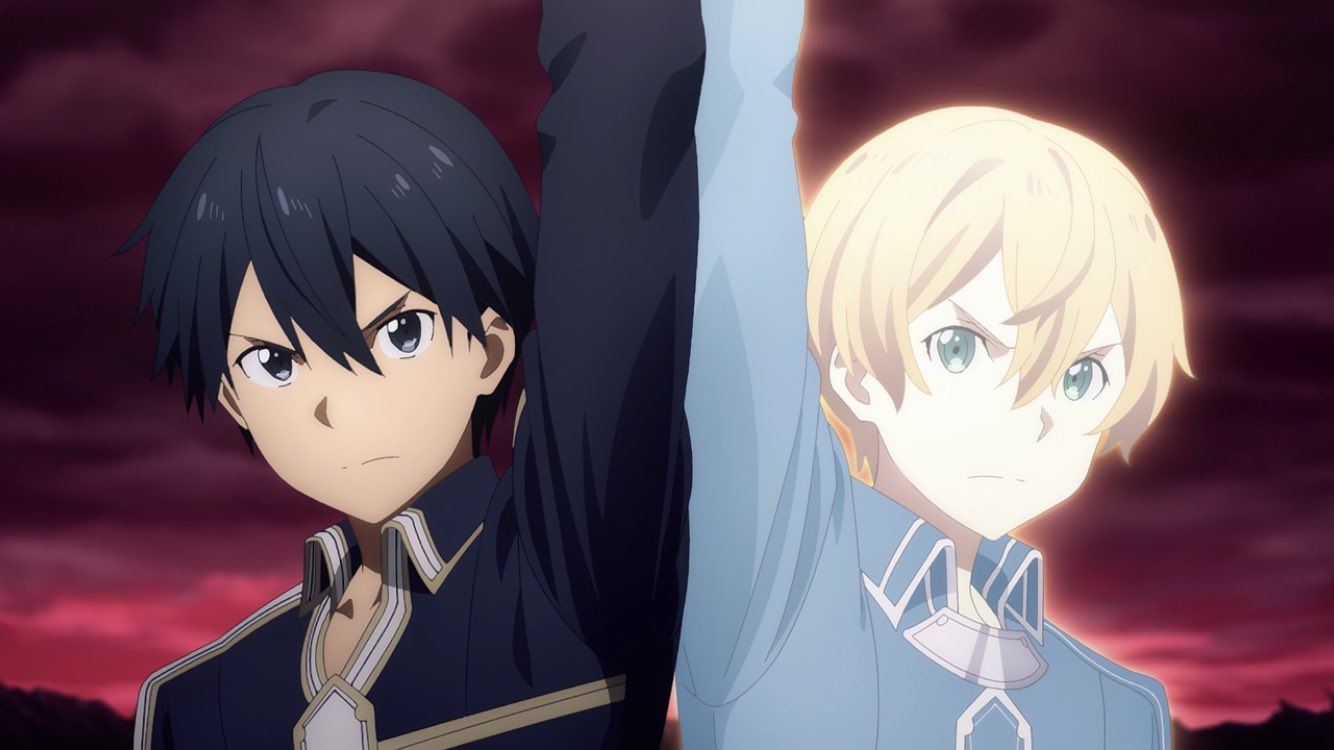 Eugeo shows up and helps Kirito fight just like Yuuki did with Asuna. The blue rose sword is fixed. Kirito logs out the red soldiers so they don't suffer and Vassago is upset he is not getting their life energy. Kirito is able to absorb the life resources to both his swords and his outfit is also transformed into his aincrad outfit. The fidgit spinner is back boys. My man looks good in black.
Kirito vs Vassago continues. This is an epic fight scene. When Kirito defeats Vassago. Vassago says he will never stop coming for them even after he logs out. He says he is going to kill them. Kirito says it is over and Vassago will not be able to log out of the underworld. He then proceeds to turn Vassago into a gigas cedar. 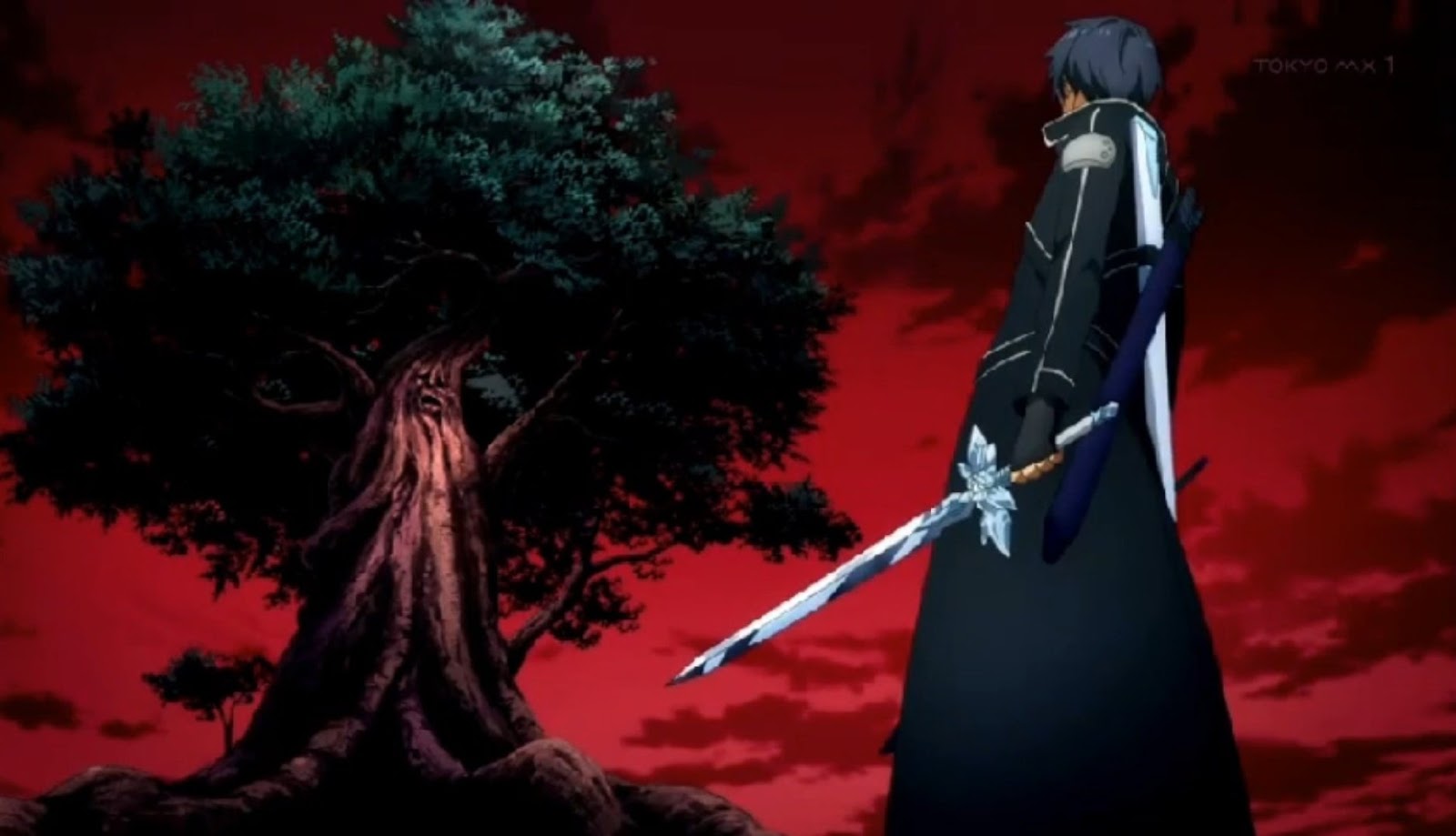 I mean. That's one way to deal with this asshole. Turn him into a tree that is impossible to cut down. Kirito releases the life force from the swords and his friends are healed. Everyone is crying and happy he is okay. 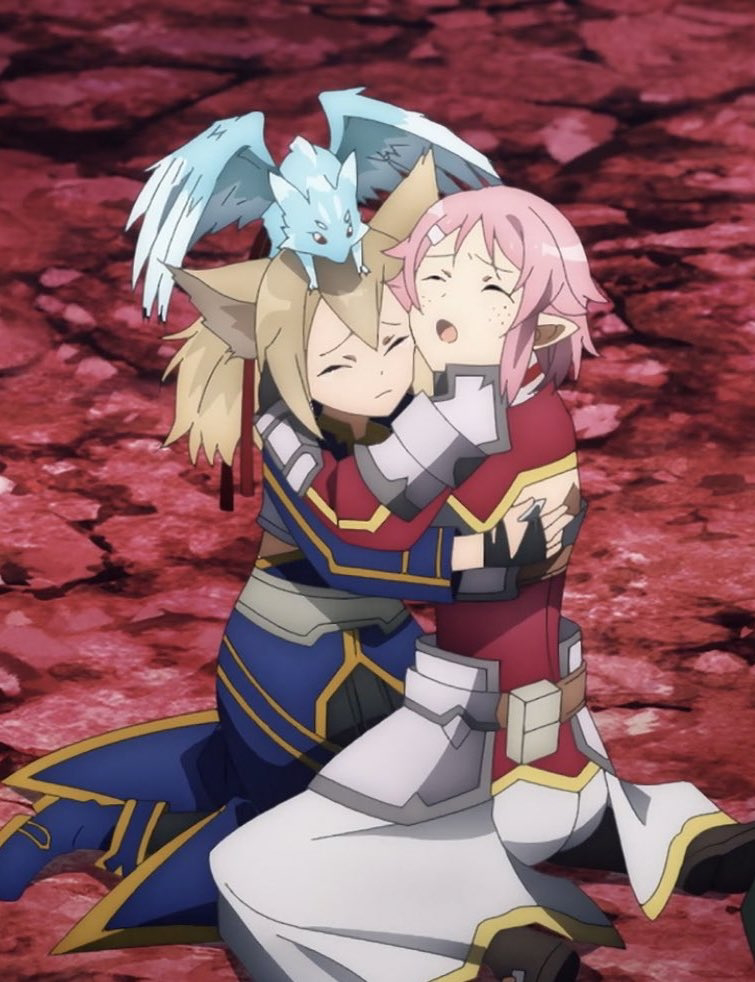 Asuna and Kirito melt my heart and embrace. Um, where is the kiss? I need a kiss here people. Anitwitter was full of people saying there was supposed to be a kiss here so I know i am not the only one who missed it. He says that he needs her help to save Alice from Gabriel. He picks her up and they fly away like Superman and Lois Lane. 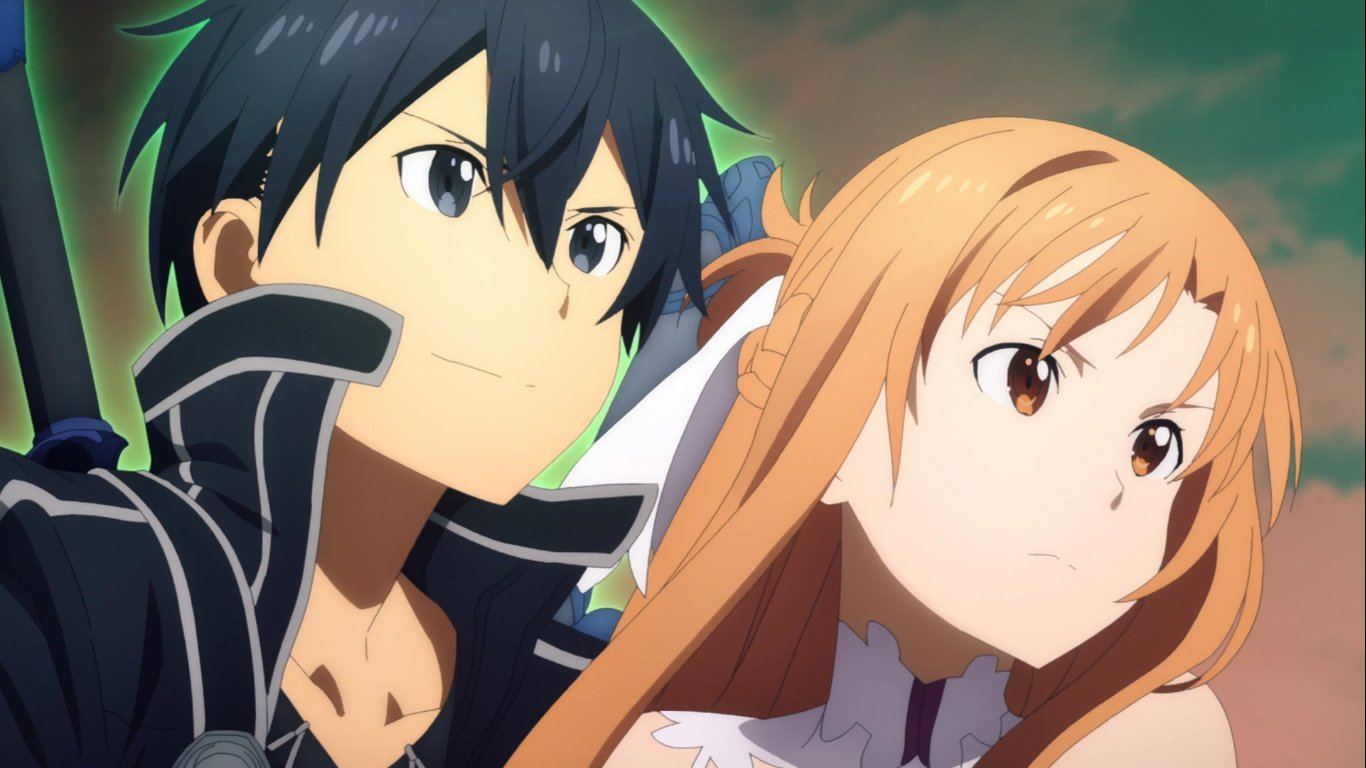 Kikuoka is able to speak to Kirito. He explains that the time acceleration rate has been increased. That 200 years will have passed before they are able to disconnect the STL's. They have ten minutes to reach the console and log out manually. If he dies after the max acceleration starts then he will spend 200 years in the underworld in total sensory deprivation.
Kikuoka wants him to get out even if it means not securing Alice because 200 years would be too much on him and he would be unlikely to regain conciousness.
Kirito is confident he will be as to save Alice and log out.
We get to see Alice. Alice orders the dragons to go and save themselves but Amayori and Takiguri try to kill Gabriel instead.  Gabriel is able to defend against them and just when you think the dragons are going to die Kirito shows up just floating in the air and saves them. Alice is looking at Kirito with tears in her eyes and we know the next episode will be the fight between Gabriel and Kirito. 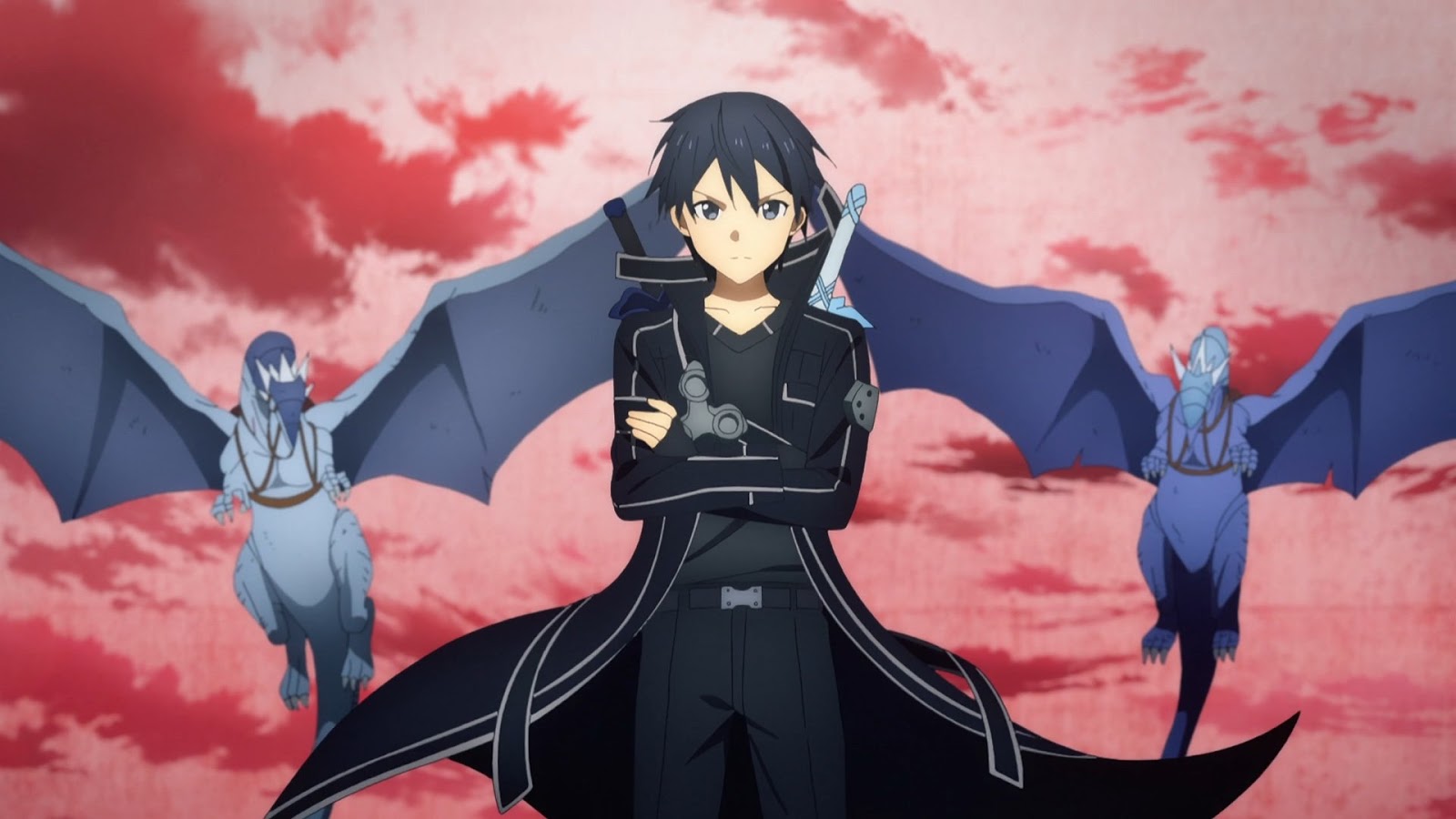 Another excellent episode. Vassago v Kirito was everything I expected and more. I never would have imagined Vassago being turned into a tree.  I am sad that Asuna and Kirito did not kiss. Maybe it's a girl thing but I needed to see that. The embrace between them was super sweet. There are some technical things that happened on the turtle that I did not fully grasp that I will have to get my more intelligent friends to explain to me. 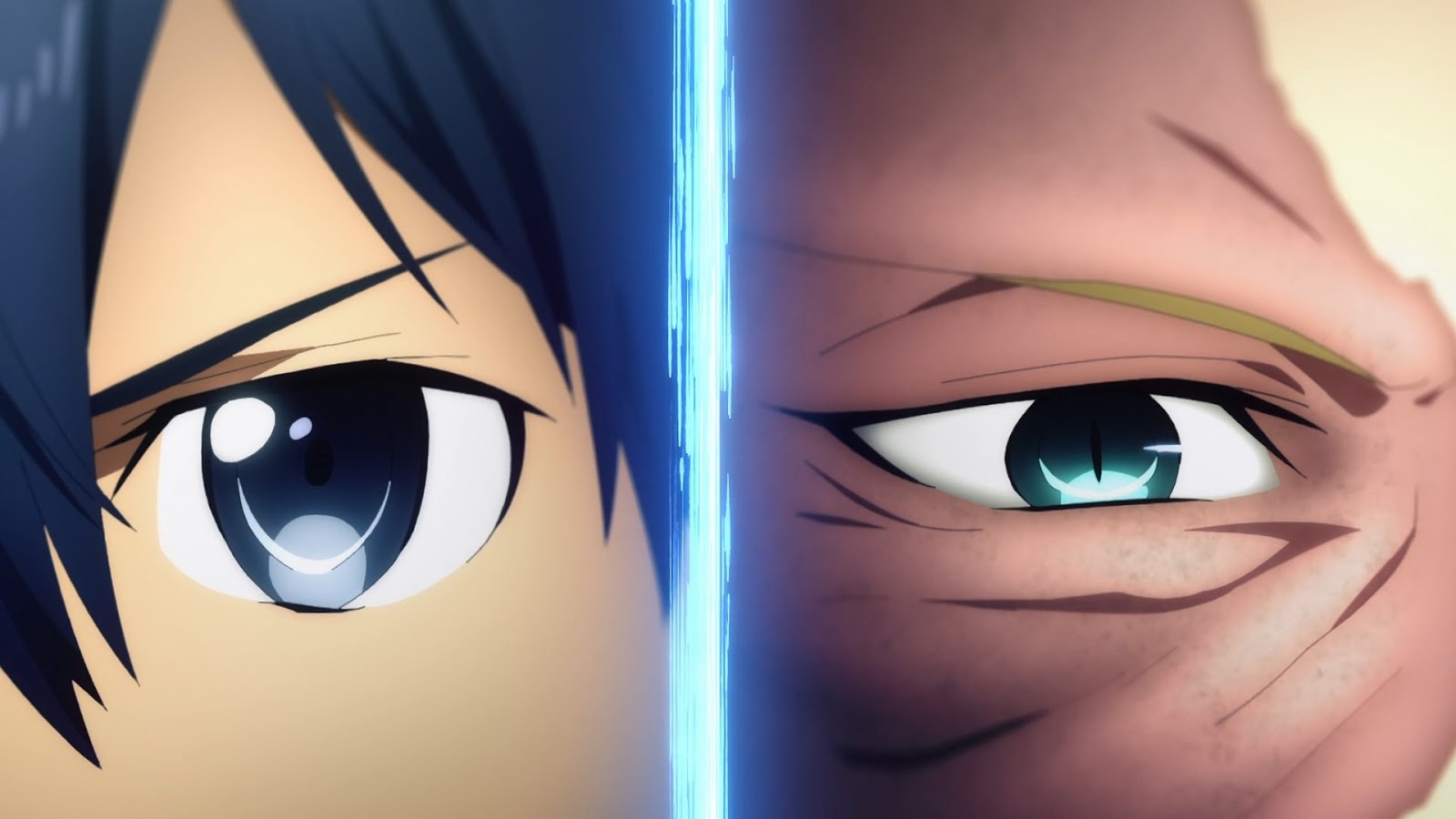