Synopsis and Review
Disclaimer: I am pretty new to anime. I just started my anime addiction in February. I am not well versed in terminology. I have the Light Novels but I have not started them. This is very much a noob review. I will say the wrong things. Once I start the LN's I hope to go back through the series and compare.
Contains SPOILERS 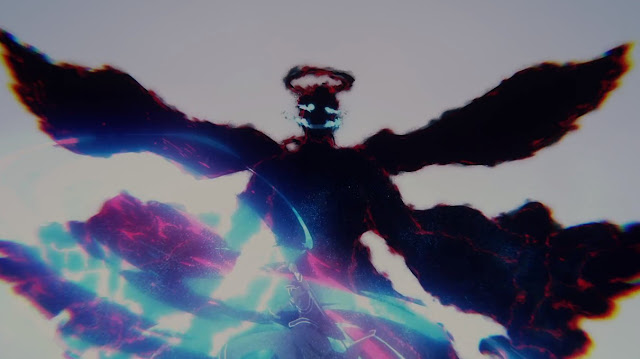 This episode starts off with Kirito and Alice. Kirito turns the dragons into eggs to protect them and they are safe in Alice's arms. Kirito apologizes to Alice for making her worry. Asuna comforts Alice and tells her everything will be all right but they need to hurry to The Worlds End Altar. Asuna points her sword at the sky and makes a staircase appear. She collapses but tells Alice she will be alright. She says they do not have a lot of time before the altar closes. Asuna takes Alice's hand and they sprint up the stairs. Alice says in her mind that there are so many questions she has and so much she wants to tell him so he has to win so he can come back to her. 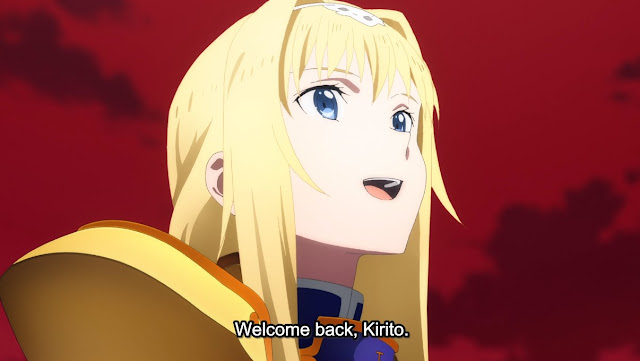 Opening Credits
I will never tire of this song. Anima by Reona is so good and I will never skip any SAO op's.
Flashback to the warning Higa's calculations about 200 years passing in WOU if they do not make it out in time. Kirito faces Gabriel and asks him who he is. Gabriel says he is one who seeks, steals and robs. Kirito asks what he is seeking and Gabriel answers souls. Gabriel asks Kirito who he is and why he is there. Kirito says who... am I? This is where I have a mini panic attack as the light goes out from Kirito's eyes. OMG please no. I don't want vegetable Kirito again. Kirito fades out and we get a black screen. 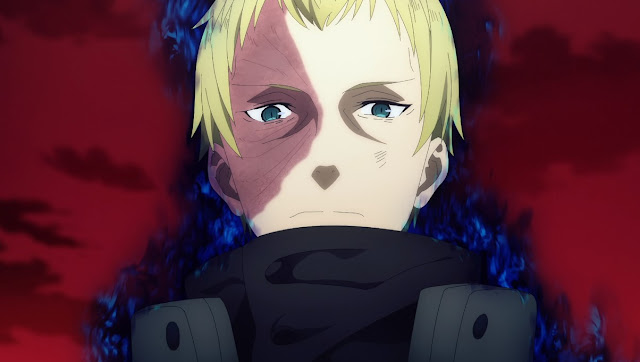 There is a light and we hear Eugeo's voice telling him that he is Kirito the Swordsman. Kirito comes to and tells Gabriel that he is Kirito the Swordsman. He asks Gabriel his name. Gabriel tells him, Gabriel Miller. Gabriel then uses the resources to grow a spirit hand and sword? Kirito sprouts wings? That part confused me a little. Kirito uses Generate all Elements and charges at Gabriel. The elements stick in Gabriel and Kirito stabs him in the back with the blue rose sword. Gabriel is unfazed but Kirito has a slash on his shoulder. Gabriel says that he estimates Alice and Asuna have 5 minutes before they reach the system console. He says that he gives Kirito three minutes and to be sure to keep him entertained. Kirito says that is very generous of him and he will entertain him. 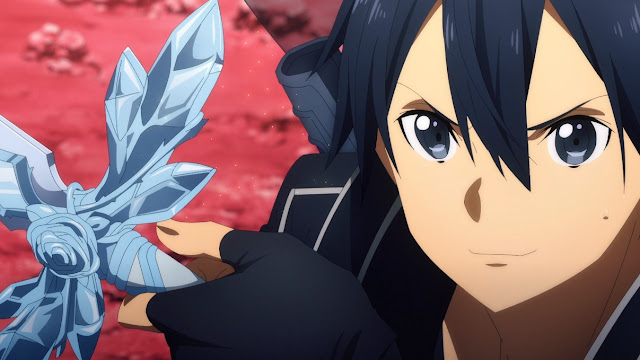 Gabriel sticks his sword into the stingray looking creature and absorbs it and sprouts his own wings.
They start to fight. Kirito is saying in his mind that he thought he had to prolong the battle long enough for Asuna and Alice to escape, but that he was being too optimistic. He will have to spend the next 200 years there if he fails. He begins to wonder if that is what he was hoping for. To stay forever in a true alternative world that surpassed Aincrad. Kirito says he is a person that doesn't understand how others feel. We get a scene with Eugeo. He tells Kirito he is wrong. That if he didn't want to leave this world it was because he loved the people he met in the underworld. 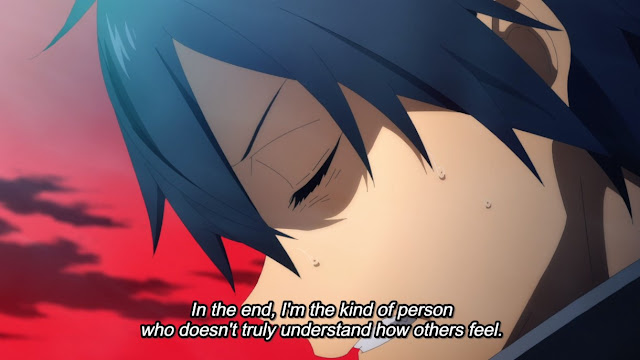 The fight continues. Gabriel is talking about how Kirito will taste. Not gonna lie I am worried about Kirito at this point. The animation in this scene is phenomenal. Classic body parts missing. 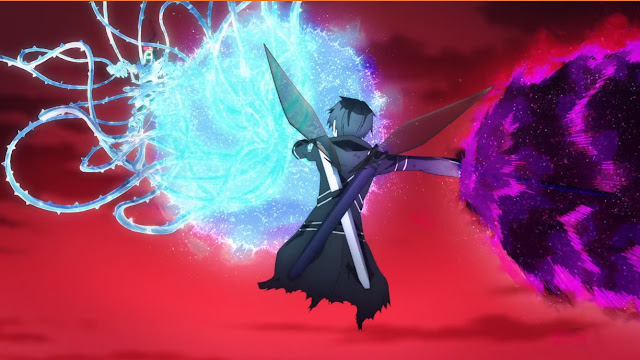 OMG, my best girl!!!! We get another scene with Sinon that I was not expecting at all. She says to send Kirito her heart. We see Leafa laying on the ground and she says to send the last of her strength to Kirito's sword. I hate this next part because the freaking harem agenda haters will use it. Liz tells Silica that she loves Kirito and Silica says that she does too. It looks like all of Kirito's friends and everyone in the underworld are praying? Sending their thoughts and prayers to Kirito? I don't know how to describe it. Each time someone prayed or sent their life force it showed up as a star in the sky. These stars then fell like shooting stars and went to Kirito. 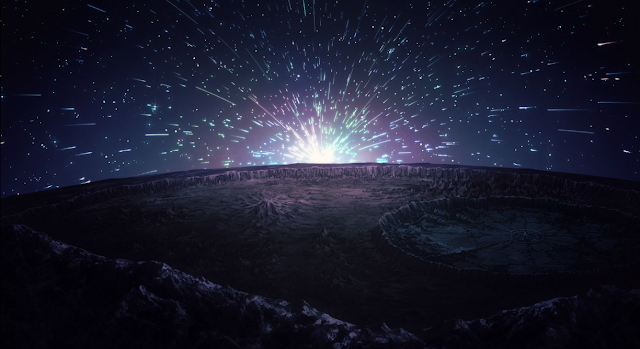 Alice and Asuna continue to race up the stairs and all the power that is sent to Kirito fully restores his body. Kirito is visited by Bercouli, Cardinal, Quinella, Lipia, and they give him a pep talk. He continues fighting Gabriel and his arm holding the blue rose sword is cut off. Eugeo appears holding the blue rose sword and holds Gabriel and tells Kirito that this is his chance. Kirito and Eugeo deal the final blows and Gabriel explodes. Asuna and Alice make it to the console and they are logged out. You then see players disconnecting and waking up one by one and the tears in their eyes. It is a very solemn moment. Kirito tells Eugeo goodbye. We see the staircase crumbling. Kirito flies up to the console and says he is thankful that they were both able to log out. He then says now then 200 years, huh? He says the names of his friends and says he is sorry. He falls to the ground and cries. I think we are all crying at this point. He sees a shadow and looks up and it is Asuna. Roll end credits. 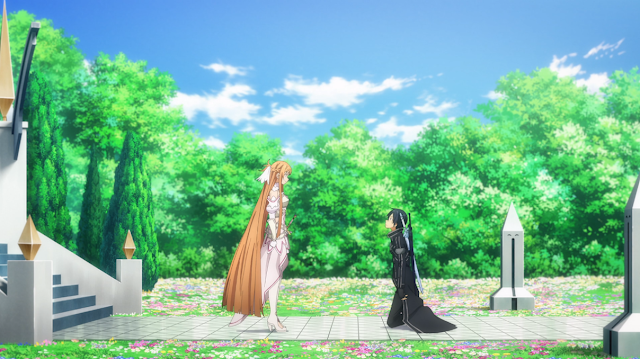 Final Thoughts:
Okay, this was so much action packed into such a short episode. The animation and effects were above and beyond my expectations. The colors were so beautiful and everything was so well-timed. Again, this just makes me want to read the Light Novels so I can compare. I know there is so much context that I am not getting in these ridiculously short episodes. The animators have done such a good job.
I am glad I got at least a short scene with Sinon. Anytime a character in this anime goes through something emotional, you just feel it in your gut. Reki is just that good of a writer. It is gut-wrenching to watch his friends wake up with tears in their eyes. It was like my heart was being ripped out when Kirito came to the realization that he was going to be stuck there for 200 years alone, without his friends. Sword Art Online has always been this way. They are able to convey the emotion that the characters are feeling in such a way that makes you feel like you are there with them at that moment. I am so sad that there are only a few episodes left. I am wondering what else can happen though. I hope they find a way to bring Asuna and Kirito out without damage. I also need to see a kiss, please. Is it Saturday yet?