April 09, 2020
Chances are, if you have read any of my tweets lately you will see I am currently obsessed with Anime. Not just any Anime, but a particular Anime called Sword Art Online. Anime came to me at a time in my life where I desperately needed something to cling to. I was severely depressed. Driven to the point where I no longer wanted to suffer anymore. A friend of mine had posted a tweet with a beautiful gif attached. It was about this anime called Sword Art Online or SAO. After seeing him tweet about it and mention it in Discord. I decided I would check it out. I paid for a subscription to VRV and started my journey. 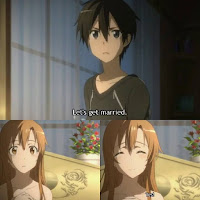 Despite what preconceptions you may have about anime, I ask that you listen with an open mind. First, anime is not just a cartoon. Anime is Japanese for animation. There are a lot of distinct differences between anime and cartoons, but it is a heated argument and I am not educated enough to go there. Most anime are in Japanese, but a lot are dubbed in English. The true anime connoisseur watches in Japanese with English subtitles. Japanese is an absolutely beautiful language and after a full season, you can tell what is going on without reading the subtitles. Sword Art Online is a Japanese light novel written by  Reki Kawahara. SAO is a mature anime. It covers many mature topics including but not limited to suicide, murder, terminal illness, and rape.

SAO is a virtual reality massively multiplayer online roleplaying game (VRMMORPG) that is played through a device called NerveGear. NerveGear allows the players to be able to control the characters with their minds and it stimulates the player's five senses so that they feel like they are really there experiencing what they are experiencing. I won't go into more detail because I really want everyone to check it out.

Two of my favorite characters are of course Kirito and Asuna. I love how much Kirito loves and cares for those around him. Even people he has just met he has this innate ability to protect them with his life. He has such a kind heart but he is fierce and skilled. Kirito reminds me a lot of my friend who introduced me to SAO. He uses his image as his avatar and it honestly fits. Another character I fell in love with is Sinon. I use her avatar on my Discord and Steam profile. She is my spirit animal. She suffered a tragedy at a young age and has PTSD. She has a lot of insecurities  I relate to her a lot. She is in the Gun Gale Online arc (storyline). She is an excellent marksman in the game. Since I love playing CSGO, I adopted her avatar.

I honestly did not expect to fall so hard for this series. Just the title of it sounded weird to me. I thought I would check it out and see what the big deal was, but episode after episode flew by and before I knew it I was hooked. At the end of an episode, something happens and you can't wait to find out so before you know it you've sat through six episodes and you have gone through every range of emotion possible. It is so well written that I feel deeply what they feel.  I just ordered the light novels on Amazon and I can not wait to read them. In my experience books go into more detail and I need to consume every single detail.

Sword Art Online leaves you wishing you could have Nerve Gear of your own. Yes, the thought of dying inside a Virtual World and dying in the real world may be terrifying to others, but I am seduced by the thought of a device that can transport me to a world where anything is possible. To be able to touch and taste things, act on desires, live out a fantasy with no physical limitations would be nothing short of a dream come true. There are also limitless medical uses for this type of technology. There are currently Genius's who are working on making my dream come true. I will go into depth on that topic another day. I hope that you give anime a chance like I did. It filled a hole in my heart and has opened my eyes to a whole new wonderful world.